‘Plan Lievense’ was developed in 1981 to overcome the problem of fluctuations with electricity produced by wind power. The basic setup of plan Lievense is displayed in figure 1 where windmills turn wind energy into electrical energy. If there is overcapacity on the electricity network, the energy is stored in a water basin, which is a pumped hydro storage (PHS). This storage can be used when there is a shortage in energy. The basin would have preferably been placed in the Markermeer.

It eventually didn’t set through because of several problems, mostly financial and ecological. When I was doing some pre-research about this question, I looked at the DOE Global Energy Storage Database (energystorageexchange.org) for large storage systems in the Netherlands. No system larger than 10MW was found, whereas countries like the UK and Canada have larger storages to compensate for sustainable energy fluctuations. A big storage solution like Plan Lievense might support a transition to a bigger sustainable energy share in the Netherlands.

That is why I chose this question of Ewoud. Given losses in energy transfer from pumped hydro storages (PHS’s) in Norway to the energy consumer in the Netherlands, it might be attractive storing energy in a closer water reservoir. On top of that, a plan like Lievense’s would reduce the reliance on other countries on stored energy. This leads to the question:

If today’s fluctuations in electricity produced by wind energy have to be handled by a Plan Lievense equivalent in the Markermeer, how much height difference has to be there to handle this? And would this be achievable?

Given a volume of discharge of 40m3, a height difference of 638m for a 535 km2 basin is needed to significantly have power capacity to catch up all wind energy fluctuations. This basin would store about 1500 times more energy than the original systems of Plan Lievense. Given the unviability of Plan Lievense and the risks of building a 638m basin near the Netherlands, this question is not realistic at all.

To start, I looked up wind directions and wind strength from the Trintelhaven, which is at the middle of the dike between the Markermeer and the IJsselmeer. Most wind comes from south-west, whereas some wind comes from the south. If wind mills were aligned with the south-west and south wind directions, the wind strengths these wind mills are facing are displayed in figure 2. 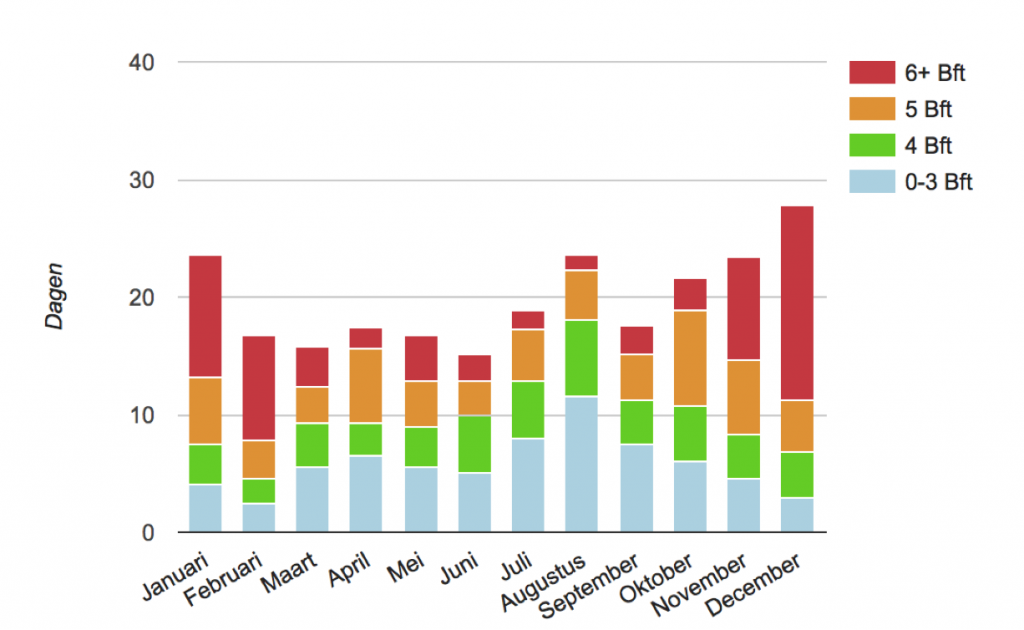 When taking into account a typical wind turbine power curve, as shown in figure 8, there is a cut-in wind speed of about 4 m/s (Lydia et al. 2014). That is the minimum wind speed to get the turbine going. To prevent the turbine from breaking down due to high wind speeds, a maximum cut-out speed (about 25 m/s) has been build in, where after the wind turbine stops. At about 17 m/s the limit of the electrical generator is reached, so this is the optimum wind speed. A wind speed of 17 m/s gives about ten times more wind power than a wind speed of 7 m/s. 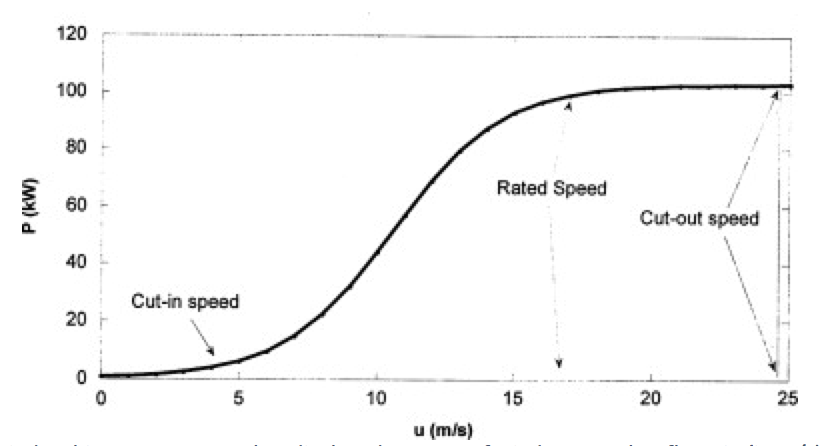 Figure 8: A typical wind turbine power curve that displayed amount of wind energy that flows in (in m/s), against the power generated (in kW). The curve is about similar for most rotor sizes, only the numbers are different. Since this graph is only about the curve and not about the numbers, input values like rotor sizes, density of air, etc. are not given. Details can be found in the article of Lydia et al. (2014).

When looking at the wind data of figure 6 and 7, it at first sight looks positive since there is always a little wind around to let the turbine run. But when taking figure 8 and the cut-in speed, rated speed and cut-out speed into account, it can be concluded that only wind speeds of about 10 m/s let wind turbines significantly contribute to the net, while a wind speed of more than 10 m/s occurs about 15% of the time (a bit more in areas like the Markermeer). When that wind speed peaks occurs during times that little electrical energy is demanded, storage may be required.

Wind power in the Netherlands has an amount of 2.85GW, enough for 4.98% of the total percentage of produced energy (Reijerman, 2014). Since Dutch windmills can reach 0 as well and sometime be full operational, it may be assumed that on a peak 2.5GW needs to be stored.

The approximate proposed Markerwaard area is depicted in figure 9 and has a circumference of 100 kilometers (Berny, 2013). The area is about 534.62 km² (Daftlogic, Google Maps Area Calculator Tool).

Little is known about the volume of discharge for large PHS projects. Although it can be seen in figure 10 that hydro system costs largely depend on the amount of power capacity. Table 4 shows several calculated volumes of discharge and their needed heights. Plan Lievense originally needed 23-meter height difference (LievenseCSO Infra B.V, 1982).

Table 4: The volume of discharge needed compared to the height needed for delivering enough power. 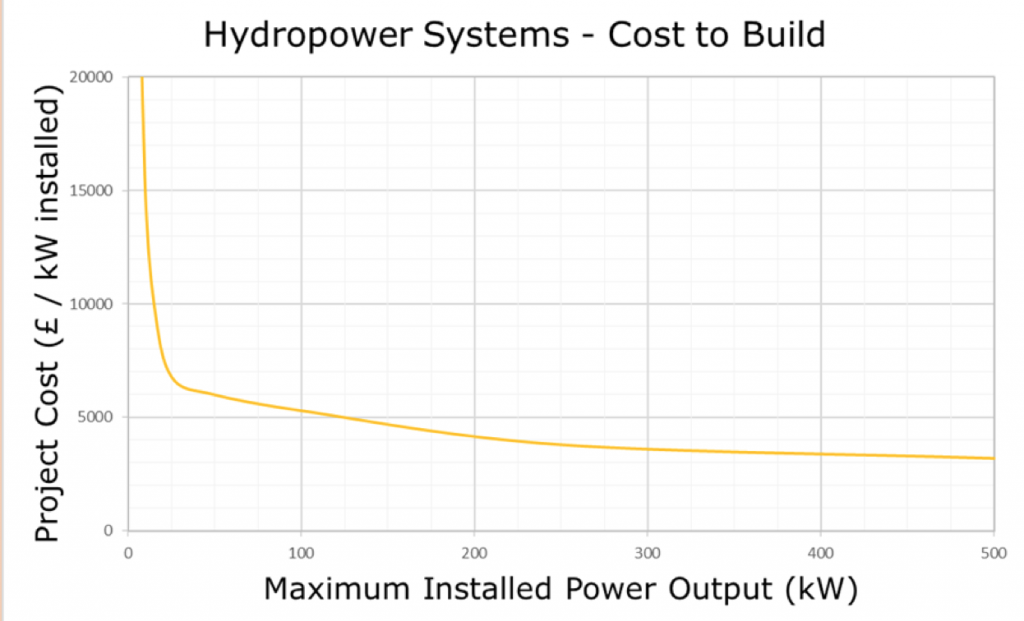 Figure 10: The costs of a hydro system to build per kW (RenewablesFirst)

As already discussed, realizing a Lievense equivalent of 2.5 GW to capture wind energy fluctuations would result in an unrealistically large basin and could do much harm if it breaks. Not even forgetting, the immense visual barrier it would take and the ecological effect it would have.

Even if a height difference of several (>10) meters is realized, it is a risky project. Even then, a breakthrough of dikes could lead to a tsunami. An underground PHS could be a solution for preventing this. More research to underground PHS systems may be necessary.

A next question may compare a Lievense’s storage to a high voltage DC-connected PHS Norway storage and an underground PHS and give the best source or mix of sources for coping with energy fluctuations.

Another option is to store energy in batteries, which is already compared in the previous question. An example of a recent planned battery storage facility is the Leighton Buzzard battery facility. It is a 6MW battery storage with a cost of 18.2 million pounds (BBC, 2014). If you would like to upscale that to the size of the original Plan Lievense (1600MW), it would cost 4.8 billion pounds. Although, there has never been build such a large battery storage.

The approximated area of the Markermeer could differ a bit, because the area was received by pointing out the area in an online tool (Daftlogic) manually. The used area is depicted in figure 7 and could differ a few percentages in reality.

RenewablesFirst, How much does a hydropower system cost to build?, retrieved on 26 January 2016 from: https://www.renewablesfirst.co.uk/hydropower/hydropower-learning-centre/how-much-do-hydropower-systems-cost-to-build/

If possible, scientific sources had priority as a data source. Although, since little is published about plan Lievense or equivalents, mostly societal sources were used to find tentative information.